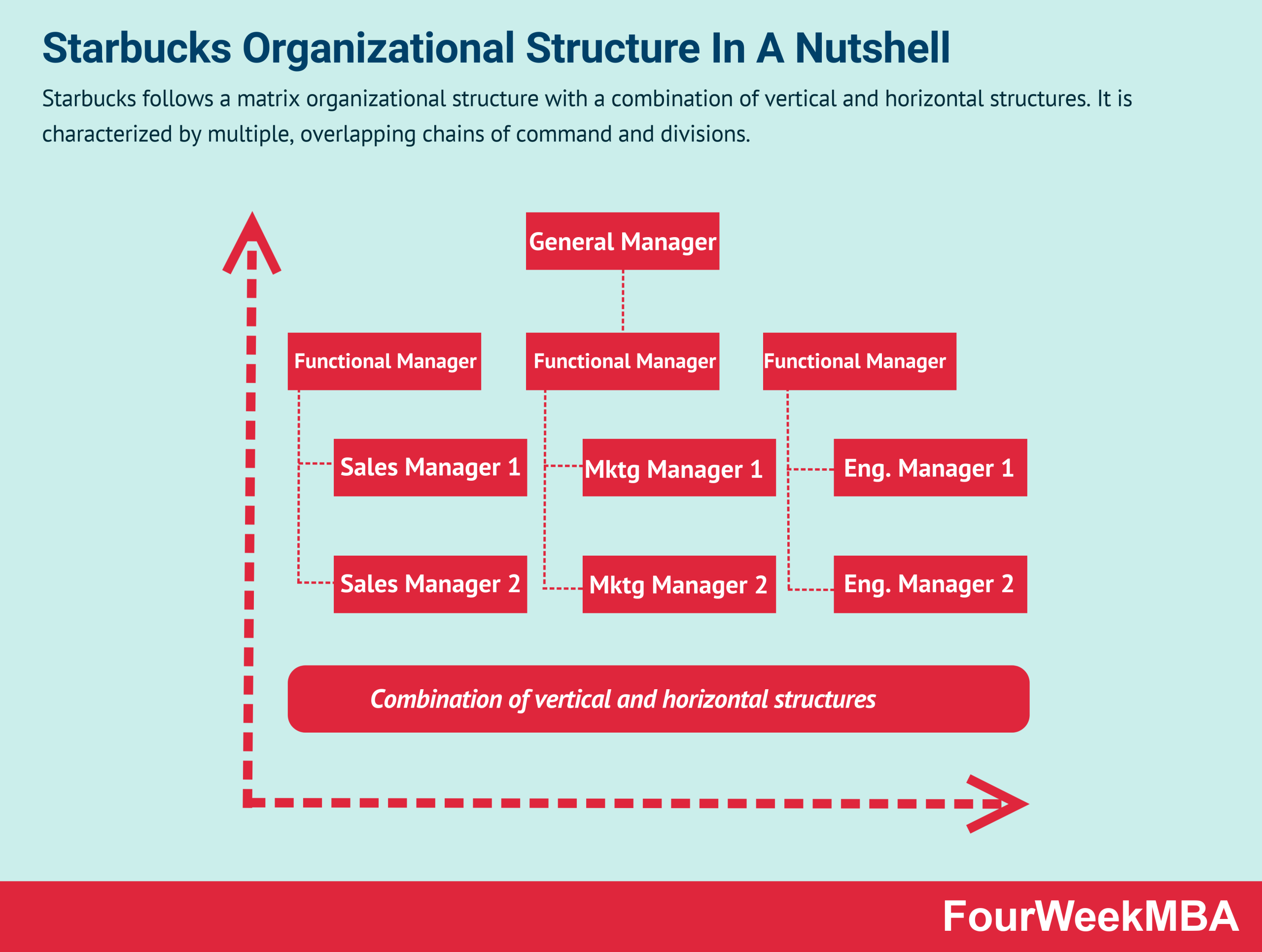 Starbucks follows a matrix organizational structure with a combination of vertical and horizontal structures. It is characterized by multiple, overlapping chains of command and divisions.

Starbucks is a large and popular café chain, with over dozens of thousands of stores in 70 countries around the world.

The company is one of several large multi-national corporations to successfully implement a matrix structure. In general terms, a matrix structure consists of functional and product-based divisions with multiple chains of command. It is also well suited to organizations that have a diverse range of products or services.

Starbucks is controlled by a board of directors who operate in the company headquarters of Seattle, Washington. In the United States, the company is split into regional jurisdictions run by district managers who oversee a group of stores. Each store is run by a store manager and shift supervisor who oversees a group of staff.

Importantly, Starbucks promotes an inclusive culture among its staff. The company seeks to recognize exemplary employee performance and encourages them to develop hard and soft skills – regardless of title or pay bracket. With these skills, Starbucks gives employees the autonomy to serve customers in a way they deem best. Given that authority and empowerment are given to low-level employees, the company can also be said to incorporate aspects of a flat organization structure.

There are four key elements to the Starbucks organizational structure.

Below we will take a look at each in more detail.

Functional hierarchy refers to the grouping of departments according to business functions. Examples include the human resource and marketing departments.

It should be noted that functional hierarchy is the most traditional aspect of the matrix structure. Much of the decision-making in each Starbucks department is centralized and only occurs at company headquarters. For instance, the corporate human-resource department makes policy changes applicable to every Starbucks café.

With the CEO at the helm, functional groups exercise top-down control to develop and then execute competitive growth strategies.

Starbucks also has several product-based divisions. These encompass divisions for coffee, merchandise, and baked goods to name a few.

They also include divisions for the numerous brands operating under the Starbucks banner, including Evolution Fresh juices and Teavana bottled teas.

With a presence in 70 countries, optimizing the structure of geographic divisions is vital for Starbucks.

Teams are invariably found in Starbucks in every Starbucks café. The company understands that team performance and good customer service drive the financial success of every location.

As noted earlier, teams are motivated and empowered to perform in such a way that they further personal goals and enhance Starbucks’ corporate culture.

Google Organizational Structure In A Nutshell

Google (Alphabet) has a cross-functional (team-based) organizational structure known as a matrix structure with some degree of flatness. Over the...