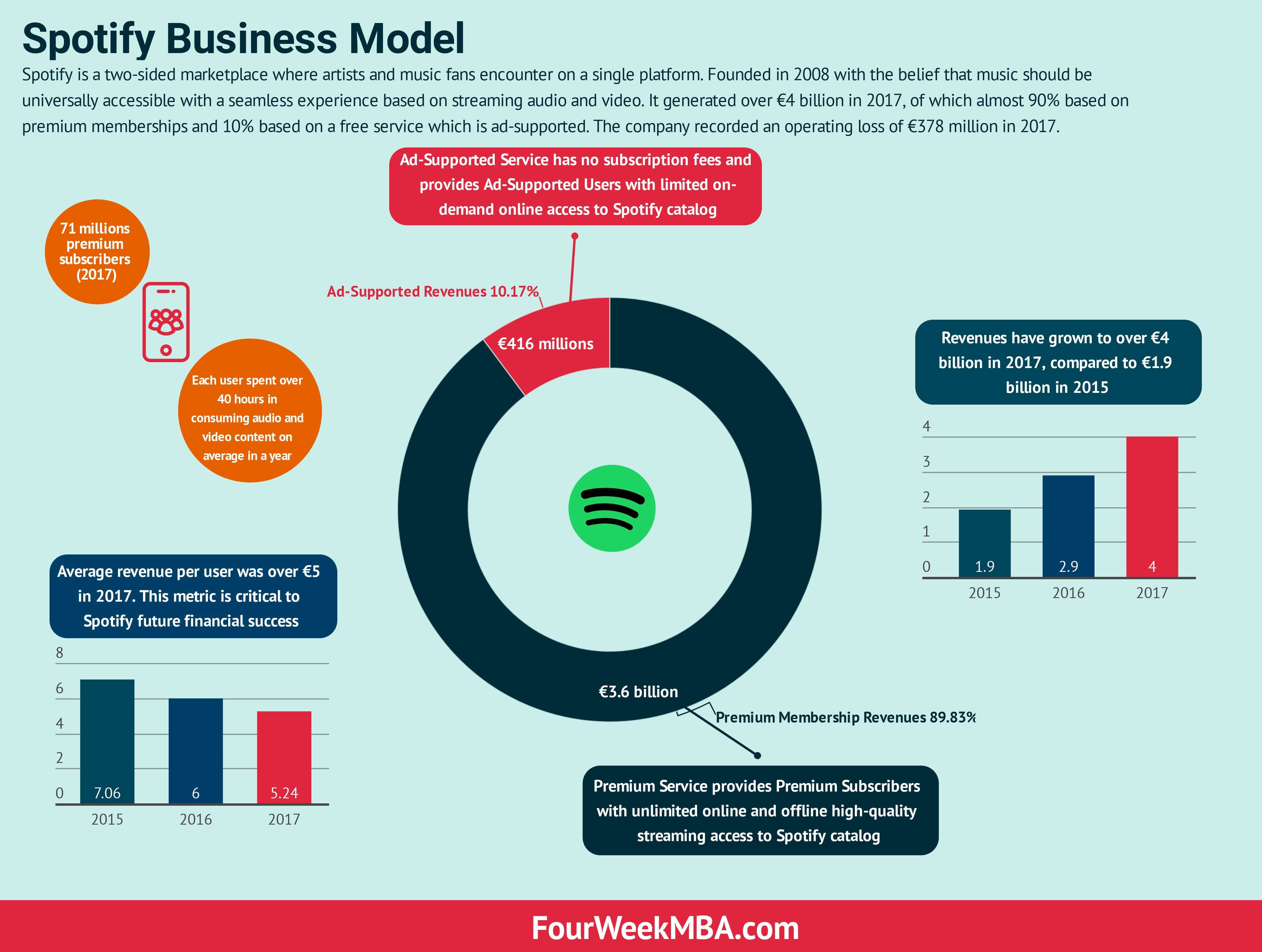 Spotify is a two-sided marketplace where artists and music fans encounter on a single platform. Its business model is based on a freemium with a free ad-supported service and a paid membership. Founded in 2008 with the belief that music should be universally accessible with a seamless experience based on streaming audio and video. It generated over €4 billion in 2017, of which almost 90% based on premium memberships and 10% based on a free service which is ad-supported. The company recorded an operating loss of €378 million in 2017.

Spotify is a place where both artists and people who want to listen to music can get together. When Spotify launched its service, back in 2008, the music industry wasn’t living a good moment. That was also due to the growth in piracy and digital distribution, which were allowing people to listen to music, while artists were losing control of monetizing their music.

In addition to that Spotify was founded on the “belief that music is universal and that streaming is a more robust and seamless access model that benefits both artists and music fans.”

This mission is critical as it also drives the business model behind Spotify. Indeed, as a two-sided marketplace, Spotify success depends on its ability to match the music offered by artists with their music fans preferences. The more this match is successful, the more Spotify will be able to retain and grow its membership base, thus substantially increase its revenues.

Spotify key partners and its challenge to gatekeepers

The principal partners of Spotify are:

Its primary challenge is to fight the old model where artists had to be signed to a label to have access to a recording studio, mainly when the radio was critical to achieving success. Spotify mission is to allow artists to produce and release their own music.

Spotify monetization strategy: the ad-supported service as a funnel for

Spotify monetization strategy is based on two primary services:

The Premium and Ad-Supported Services work independently yet they are critical to each other. The ad-supported service is what allowed Spotify to scale and it is also the crucial ingredient in the paid members’ acquisition in Spotify.

Premium Services, include standard plans, Family Plans, and Student Plans. The aim of each package is thought to appeal to Users with different lifestyles and across various demographics and age groups.

Also, in some markets where subscription services are not yet the norm, Spotify offers prepaid options.

Spotify counted over 71 million Premium Subscribers in 2017. Those members are activated via several marketing channels:

On the ad-supported service, Spotify monetizes from the sale of display, audio, and video advertising delivered through advertising impressions.

The revenues comprise primarily the number and hours of engagement of Spotify Ad-Supported Users and its ability to provide innovative advertising products. A key ingredient is Spotify demographic segment primary made of users between 18 and 34 years old, which represents a massive opportunity of monetization via advertising:

Spotify business model is still evolving. Even though its revenues primarily come from paid members, the company might try to push more on its ad-supported services, and enter more and more in the digital advertising space. Therefore, a business model that is subscription-based might become advertising based in the long run. As of now (2017) over 10% of Spotify revenues come from ad-supported services, while the remaining, about 90% comes from membership services.

Each company needs to tap into a distribution strategy that guarantees a stream of users to have a sustainable business model. Much of Spotify costs are based on royalty and distribution costs related to content streaming. Those are paid to specific music record labels, publishers, and other rights holders, for the right to stream music to Spotify Users.

Of course, the revenue generated on lower priced plans (such as the Family and Student Plan) carry a lower cost compared to other plans.

The acquisition costs also depend on targets which can include measures such as:

Some of the licensing agreements that impact on Spotify costs include Universal Music Group, Sony Music Entertainment, Warner Music Group, and with Merlin.

Understanding the metrics that an organization looks at to evaluate the growth of its platform, in a way also highlights the vision that company has about its users, its business model and what it’s important for its financial success. A set of metrics that Spotify looks at comprises:

Spotify tracks MAUs as “an indicator of the size of the audience engaged with its Service.” This is defined as the total count of Ad-Supported Users and Premium Subscribers that have consumed content for greater than zero milliseconds in the last thirty days from the period-end indicated.

Premium Subscribers are users that have completed registration with Spotify and have activated a payment method for Premium Service.

That is the total count of Ad-Supported monthly active users that have consumed content for greater than zero milliseconds in the last thirty days.

This monthly metric shows the revenue recognized in the quarter indicated divided by the average daily Premium Subscribers in that quarter, divided by three months.

That represents the premium members cancellations in the quarter indicated divided by the average number of daily Premium Subscribers in that quarter, divided by three months.

That represents the aggregate number of hours. Users spent consuming audio and video content on Spotify.

It’s easy to think of Spotify as a modern tech achievement, made of automated algorithms able to find out any taste a music fan has. Yet an exciting aspect of Spotify is its user-generated content, in which music listeners can easily and quickly curate and save their playlists to share with other Users. As of 2017, Spotify had over 3.2 billion User-generated playlists, which generated over 500 million streams daily and accounted for approximately 36% of Spotify monthly Content Hours!

Curated Playlists by Spotify editorial team which carefully curates them that allow Users to listen to music in specific genres account for approximately 15% of our monthly Content Hours.

Spotify marketing is based on four main strategies:

Spotify started in 2008 as a freemium service which aim was to create a two-sided platform that connected artists with music fans without having artists go through the traditional distribution channels and gatekeepers. In 2017 Spotify made over €4 billion in revenues. Even though the company primarily makes money via its paid subscription members, it also has an ad-supported service.

The ad-supported free service has played a key role, as an additional revenue stream that in 2017 drove more than 10% of its sales and also a critical sales funnel that drove 60% of added premium members.

Even though Spotify made over four billion euros in revenues, the company reported a net loss of €378 million. Spotify business model is still evolving, and it might well emphasize more and more on its ad-supported service to grow its revenues.

An interesting aspect is that even though Spotify is driven by AI, one of the most popular features – that drives most of the content hours on the platform – is the user-generated playlists that represented about 36% of monthly content hours!

Yahoo made over $5 billion in revenues for 2016. Those primarily consisted of search and display (both served on Yahoo...