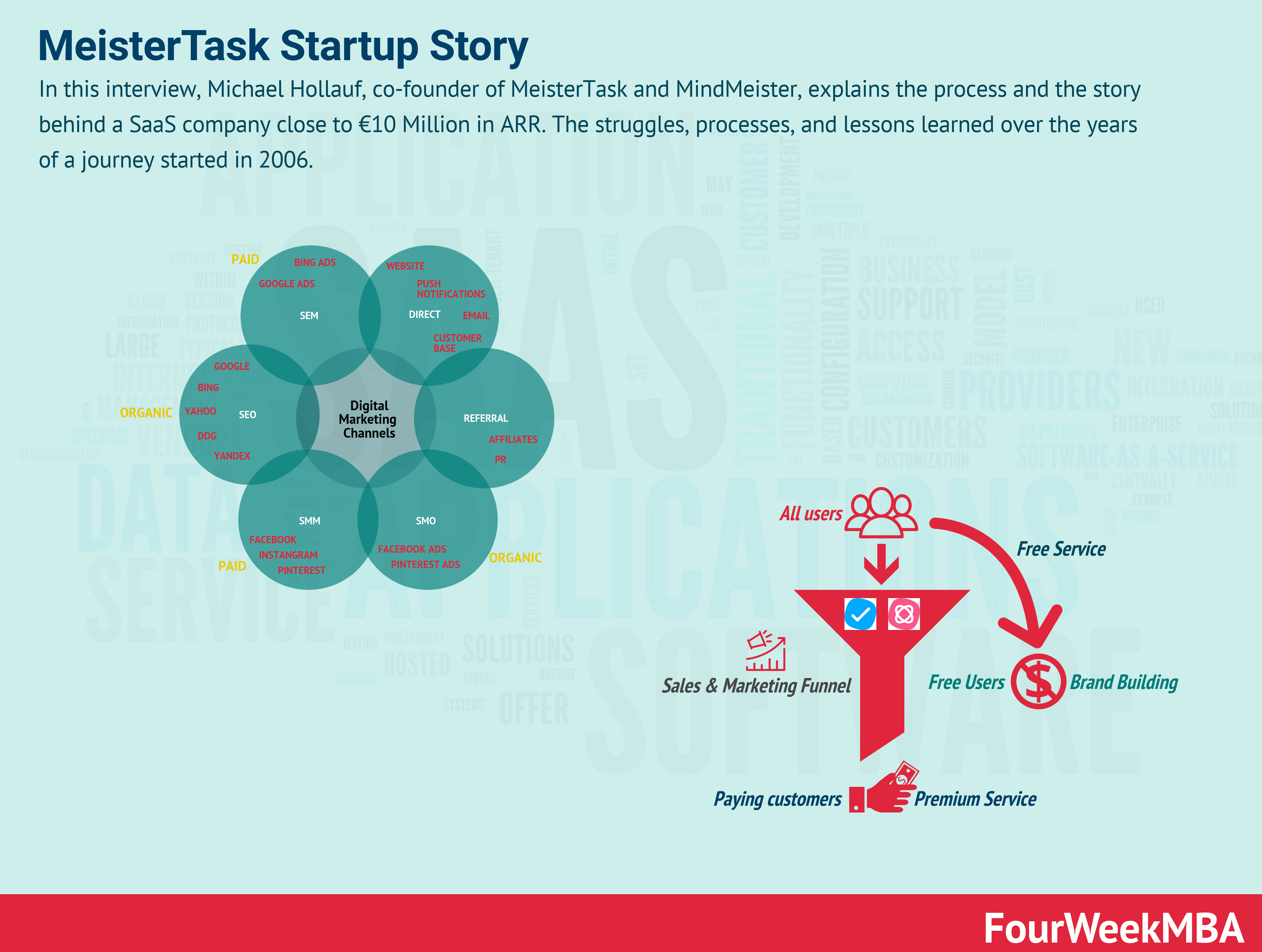 In this interview, Michael Hollauf, co-founder of MeisterTask and MindMeister, explains the process and the story behind a SaaS company close to €10 Million in ARR. The struggles, processes, and lessons learned over the years of a journey started in 2006.

Meister, the German software company that develops these tools is a FourWeekMBA 2020 parter, and with them, we explore their journey. As we’ll see there are several lessons that founders or other business people can learn from this story!

Meister’s mission is to “inspire creativity in business, education, and daily life by developing the most innovative and easy to use software tools.”

The first tool you launched to execute your mission was MindMeister, which has become a world-leading mind mapping solution.

Was there any specific problem you had experienced yourself?

Yes, actually we were trying to fulfil a need that both Till Vollmer, the other co-founder of MindMeister, and I had at work. In 2006, we were working together at a tech company and using a tool called MindManager. It was the only real mind mapping software at the time, and we used it to brainstorm products, organize meetings and conduct presentations with customers.

MindManager was a useful tool but it had some limitations. It was a standard, locally-installed OS-dependent program, licensed for about $300.

That meant that we couldn’t share our mind maps with anyone who didn’t purchase and install the program. Even if you could share, you couldn’t collaborate, which we saw as crucial for a brainstorming tool.

Around that time, Google announced that they were acquiring a company called Writely. They turned it into what is now Google Docs, which we immediately started using to collaborate on work projects.

How did you decide whether to raise capital or bootstrap your company?

But after a year we felt the need to put more resources into MindMeister’s development. And we knew we wouldn’t be able to do that if we only kept it as a side project to the outsourcing company. We saw a real opportunity with MindMeister and knew it could take off if we devoted time and people to it.

So, we decided to take an angel investment of US $600,000 to accelerate development and rollout. This is the only investment we ever took. Soon after, we started making a profit.

Today we are close to 10 Million ARR and doing very well. We do still consider what we would be able to do with another investment round and how much we could achieve with it. So, it’s still in the back of our minds.

What traction model did you use in the early days? In short, how did you manage to grow?

In the very beginning, we sent 200 invitations to friends and business contacts. We thought they might be interested in a web-based mind mapping solution, and we were right. They loved it and spread the word. One of those first users posted a review on Delicious, which was the equivalent of Product Hunt at that time. The review made it to the front page and soon people were writing to us, asking to be invited.

By the time we made it to the product launch on February 7, 2007, 1,000 people were already using MindMeister. With the release of the beta version to the public, that number shot up to 10,000 users.

The number of users grew even faster once the invite-only phase came to an end. At that time, MindMeister was completely free, but we had a payment option built-in. We told users that someday we would start charging, but that they could use it for free until then.

There were a number of factors that helped us grow over the following years. We created an Affiliate program, which encouraged users to spread the word about us online.

We also created an option for people to publish their mind maps, and share them on social media or embed them on their own websites (although the latter caused some significant trouble for us when Google suddenly decided to penalize the backlinks created by embedded maps).

Aside from all this, we’ve always put a lot of effort into making sure that we’re discoverable, both through SEO and, of course, paid ads.

What challenges did you have in the first growth stages?

Our first big challenge was one that sticks with us even today: getting our users to trust in the safety of the cloud.

Mind maps by nature contain intellectual property in the form of ideas and thoughts.

And, of course, those should be protected! That’s why I think this issue is so prominent for us and why we give such importance to our security at MindMeister.

Do you think using a freemium model was a key growth driver?

Absolutely. The freemium model lowers the entry barrier for potential users, and those who never turn into paying customers still help us grow by recommending us to friends and colleagues. Of course, the freemium model also comes with certain difficulties and drawbacks. For example, many sales and marketing automation tools, which would help us work more efficiently, only offer pricing plans based on the number of users i.e. leads you want to manage with them. Since we have millions of users, but only a small percentage of them generates revenue for us, the cost of such tools is often too high.

What business model frameworks (if any) do you use to review your company’s growth?

To be honest, I just had to Google “Business Model Framework.” I guess that says it all! No, we don’t use any — the closest thing we’ve done is introduce the OKR system this year. We’re using it to manage our goals and align the entire company towards them.

In terms of product development, is there any specific framework that proved effective for your organization?

Like many SaaS startups, we started out as an agile company. Not necessarily because we knew so much about the framework and its benefits, but because it suited the way we worked: no specs, try something out and test it, and, if not, iterate.

The bigger we got, the more we started to work with specs, use cases, and things like that. These days I’m not sure if we could really call ourselves agile anymore.

We still work in two-week sprints though, our other product, MeisterTask, uses the Kanban methodology, and we use some elements of SCRUM as well.

And what about the team management, is there a specific framework that helps you scale?

We’re just two quarters into using it but it seems to already be paying off.

It’s a lot of management work but we can see that the different teams are much more focused on our quarterly objectives, and it’s clear to everyone what the priorities are.

How do you see your business model evolving?

We’re constantly thinking about trying out slight adaptations of the business model, such as allowing trials, or at least trials of some larger paid features.

We might even give full premium plans with a 14-30 day free trial.

I don’t see that happening in the near future though because it is a big change that could have drastic effects on business. While we do need to tread carefully, we’re always open to new ideas.

From the interview, there are many lessons, that thanks to Michael Hollauf and Till Vollmer, we can learn. They had to go through an iterative process since 2007, and this article shows how hard it’s to grow a SaaS business from scratch.

Some key points are: