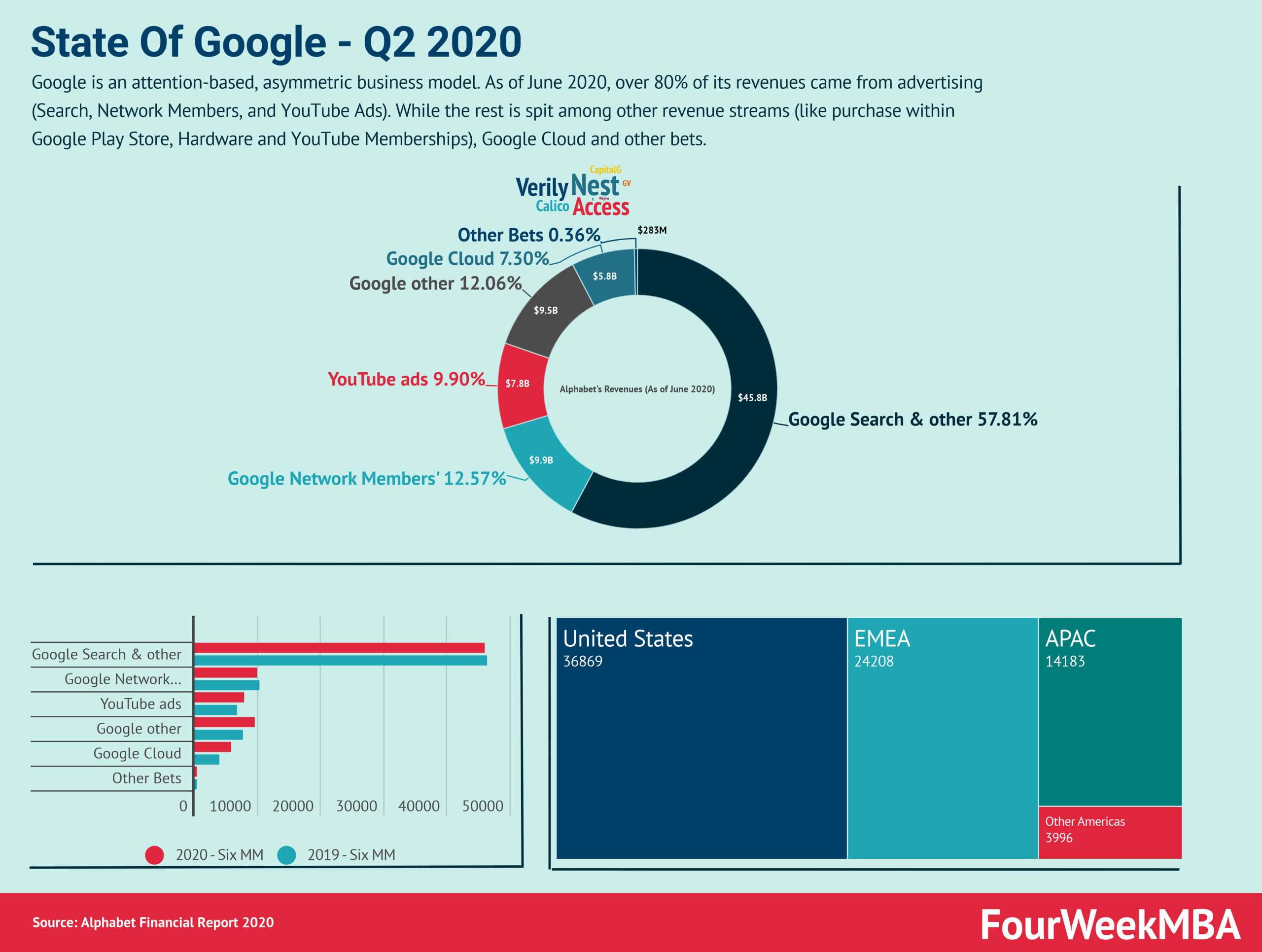 For the quarter ended June 30, 2020, Google’s advertising revenues declined compared to the prior year due to the impacts of COVID-19 causing reductions in global economic activity.

Google Search & other (all these produced on Google’s properties) revenues decreased by $2.3 billion in the first three months of 2020, compared to 2019. Beginning in March of 2020, the effects of COVID-19 on both desktop and mobile search led to a decline in revenues when, despite an increase in user search activity, the revenues were adversely affected by a shift to less commercial topics and reduced advertiser spending.

To appreciate these changes it’s crucial to understand Google‘s pipeline in terms of users’ behaviors. Indeed, search from users can be classified in three main categories:

Throughout the pandemic the informational search has spiked. However, transactional and commercial (users searching for commercial keys such as “buy X” or “product A”) searches decreased.

Thus causing at the same time a decrease in revenues, as the keywords searched by users were less valuable for advertisers on Google’s Ads platform.

However, in the second quarter of the year, things started to stabilize. As lockdown measures got lifted (or perhaps as people started to get out), also search behavior adapted again, and it picked up.

Thus, the overall loss in revenues from advertising in the six months of 2020, compared to 2019 was around $368 millions, overall.

In the six months of 2020, compared to 2019, Google’s network members decreased by $305 million. This decline in revenues was primarily driven by Google Ad Manager and AdSense due to reduced advertiser spending driven by the impact of COVID-19.

YouTube video search engine, with its video-based advertising, showed instead not only a resilience during the pandemic. But a strong increase in revenues.

Improvements to ad formats and delivery and increased advertiser spending.

Google advertising machine is primary based on clicks. The more clicks the company is able to generate toward advertisers’ websites, the more it will make money through its Google Ads machine.

Yet, for those clicks to be valuable for both the advertiser and Google, it needs to drive qualified traffic, while Google is able to keep the click cost for advertisers constant. However, in the first part of the year:

In short, while paid clicks increased on Google – driven by growth in views of YouTube engagement ads; an increase in clicks due to search queries resulting from ongoing growth in user adoption and usage, primarily on mobile devices; and improvements in ad formats and delivery – the cost per click for advertisers decreased, thus also reducing Google advertising revenues.

What caused the decrease in cost-per-click advertising?

Google’s isn’t just, what we can call, a last-mile advertising machine, but also a digital branding machine. When users see brands’ names on the search results pages, those count as impressions.

Overall, by June 2020, impressions count increased by 14% compared to 2019, yet the cost-per-impression decreased, thus resulting in a negative change.

While increased impressions had a positive effect on revenues, the reduced budget of advertisers (especially on branding activities) reduced the overall revenues for the company.

Google Cloud revenues are made of offerings from:

Google’s Cloud revenues increased by $1.8 in the six months ended June 30, 2020, compared to the same period in 2019. GCP and G Suite offerings drove this growth. Within GCP, infrastructure, data and analytics platform products were the largest contributors.

Inside Google’s other revenue streams

Google other revenues are made of:

What drove Google’s other revenue growth?

The growth was primarily driven by Google Play (driven by sales of apps and in-app purchases) and YouTube subscriptions (driven by an increase in paid subscribers).

At the same time Google recorde a decrease in hardware revenues (Pixel Phones, Google Home and the rest).

Other Bets revenues consist primarily of revenues from the sale of Access internet services and Verily licensing and R&D services.

Google’s other bets are not profitable yet.

For Google’s cost of sales, or the money the company spends to generate revenues in the first place. Those costs of sales are broken down into:

What does influence Google‘s TAC?

A key metric to look at to evaluate the health of Google in the long-term, it’s the TAC, or traffic acquisition costs.

In short, Google runs several expenses to deliver its search results in the first place, or to enable other partners to deliver advertising on their websites, as part of Google’s networks.

Therefore, we have two main types of TAC.

What does influence Google’s other cost of revenues?

While the TAC remained stable in the first six months of 2020, compared to 2019. Other cost of revenues increased substantially (over $4 billion). Some key aspects determined TAC to remain stable:

Cost of revenues increased by over  $4 billion for the six months ended June 30, 2020, compared to 2019 was due to an increase in data center and other operations costs and an increase in content acquisition costs primarily for YouTube consistent with the growth in YouTube revenues. This increase was partially offset by a decline in hardware costs.