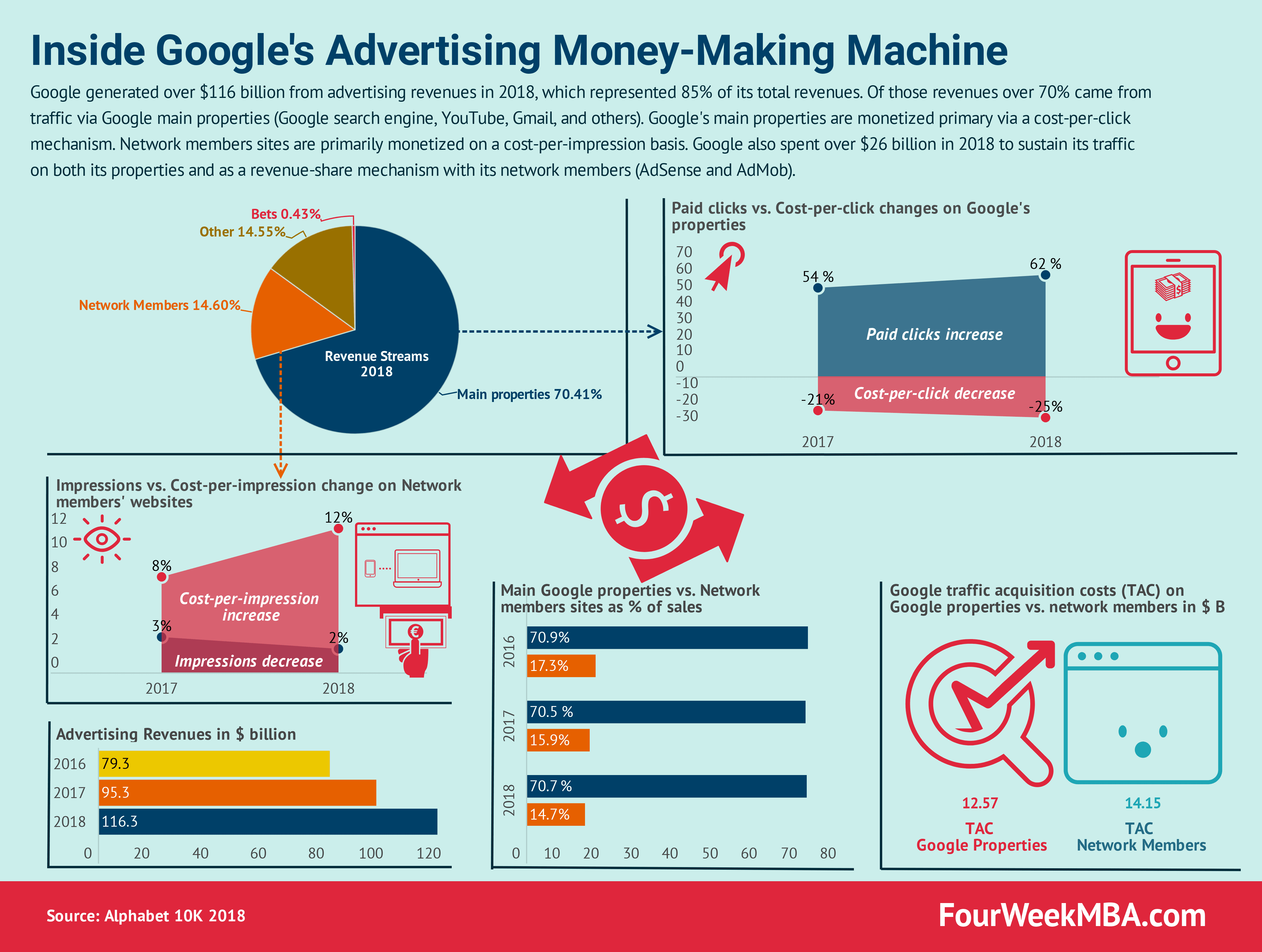 For that matter you need to understand two key elements:

In a media business (yes Google is a media company as of 2019) those two elements are critical to building a business that makes sense. This might seem trivial also for starters.

Yet, in a large organization like Google, which has built an empire on its advertising machine, understanding its dynamic can make you understand how a whole industry (that of digital media) works.

Indeed, if you have a website, you have two issues. First, you need to bring qualified traffic to it. Second, you need to be able to monetize that traffic at a higher rate compared to its costs.

For that matter, you’re a “traffic arbitrageur” as you make money on the difference or delta between the price to acquire traffic and the revenues in selling that traffic back.

Thus, going back to Google’s advertising business there are two primary traffic sources:

Each of those traffic sources gets monetized differently. Indeed, the traffic coming from distributions and partnerships agreements get driven to Google’s main pages, to be monetized with its paid advertising machine, called Google Ads.

For instance, in 2018 Google properties revenues increased by $18.5 billion compared to 2017. The growth was primarily driven by increases in mobile search and growth in YouTube video advertising,

For that matter, Google takes into account – to measure the success of the monetization strategies on its properties – two key metrics:

For instance, in 2018 the cost-per-click for business advertising on Google decreased by 25% according to Google’s annual report for 2018. However, the business continued to grow substantially as more paid clicks were placed on Google.

Why did that happen? Some of the reasons might be a higher budget invested by companies on Google. Also, Google is also monetizing more efficiently its other properties (like YouTube). Yet it might even be because Google is shrinking its organic traffic reach, in favor of paid listings:

In short, it seems Google is becoming more polarized.

On the one hand, Google offers paid listings, that are taking more and more space, especially on mobile devices. On the other side, Google is eating up organic traffic by offering direct answers to its users. This should not be a surprise.

As Google highlighted in its annual report for 2018, “our products have come a long way since the company was founded two decades ago. Instead of just showing ten blue links in our search results, we are increasingly able to provide direct answers — even if you’re speaking your question using Voice Search — which makes it quicker, easier and more natural to find what you’re looking for. You can also type or talk with the Google Assistant in a conversational way across multiple devices like phones, speakers, headphones, televisions and more.”

Indeed, Google’s mission “to organize the world’s information and make it universally accessible and useful” is also its North Star.

It is essential to have clear in mind the distinction between two ways two consume content:

In 2018 Google Network Members’ revenues increased by $2.4 billion from 2017. The growth was primarily driven by strength in AdMob and programmatic advertising buying.

Instead, Google AdSense revenues declined. Additionally, the growth was favorably affected by the general weakening of the U.S. dollar compared to certain foreign currencies.

Another key element is about its traffic acquisition costs:

To sustain its traffic, Google spent over $26 billion of its revenues! There is a clear distinction between the way Google acquires traffic at two levels:

In 2018, Google traffic acquisition costs (TAC) increased substantially due to changes in partner agreements. Also, the swift change toward mobile also resulted in higher TAC because on mobile users are channeled through paid access points more frequently. This, of course, is good for Google which makes way more money from mobile, but it also increases its traffic costs.

Also, browsers (are still an essential mobile access point) will want more money from Google to close exclusive deals with them.

Instead, when it comes to the increase in the Network Members TAC rate, this is happening through the fact that more and more publishers part of the AdSense network is switching to programmatic advertising to manage more efficiently their advertising inventory.

What Is A Business Model Essence And Why It Matters

A Business Model Essence according to FourWeekMBA is a way to find the critical characteristics of any business to have...