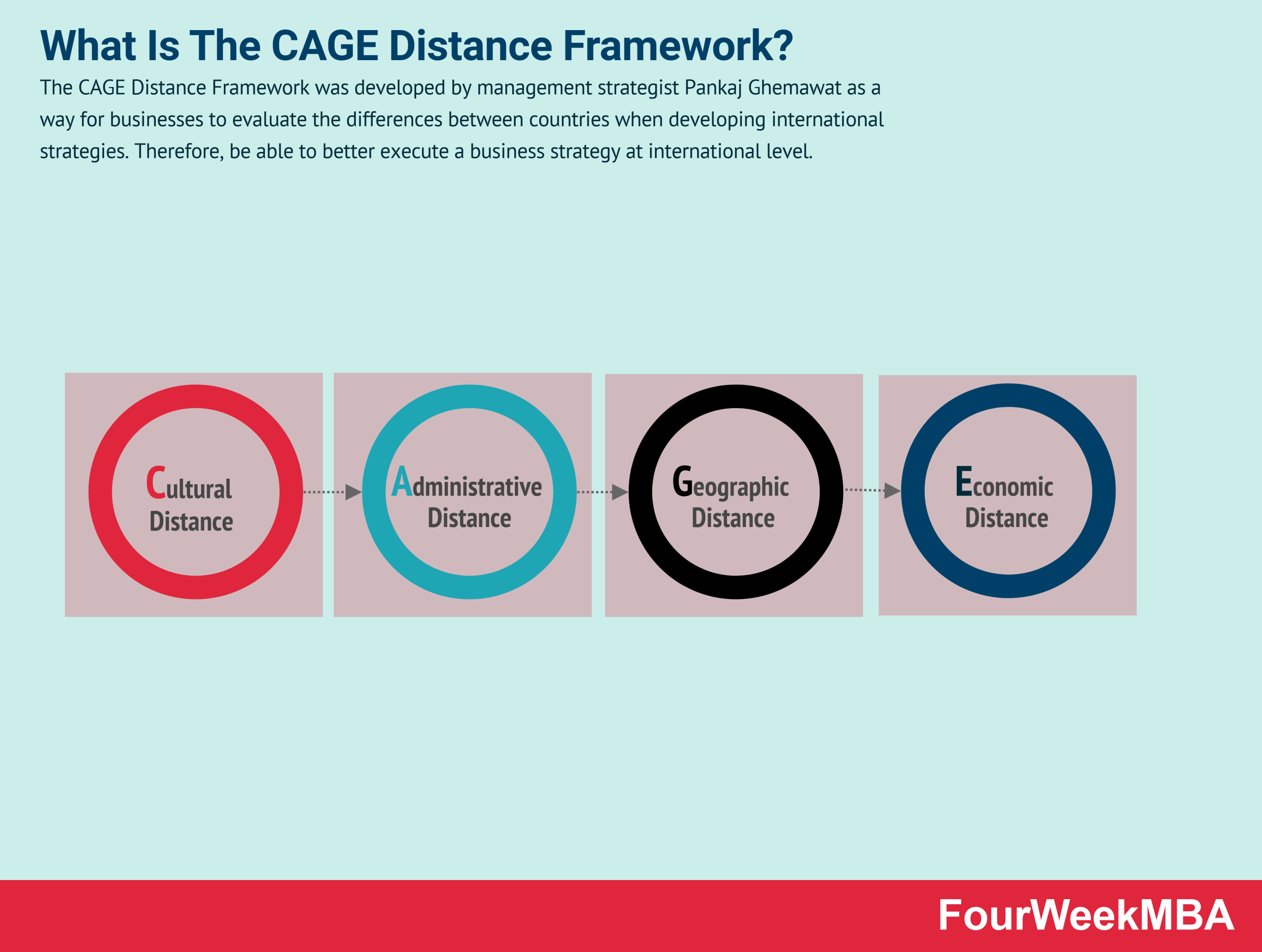 The CAGE Distance Framework was developed by management strategist Pankaj Ghemawat as a way for businesses to evaluate the differences between countries when developing international strategies. Therefore, be able to better execute a business strategy at international level.

In his framework, Ghemawat argued that distance was not simply used to represent physical or linear distance.

Instead, “distance” describes any factor that varies between the home-market that a business operates in and the international market that it hopes to operate in. Indeed, the framework’s fundamental purpose is to describe the opportunities and risks of expansion in a global context.

To that end, Ghemawat grouped these factors into four broad categories that are responsible for the CAGE acronym: Cultural, Administrative, Geographic, and Economic.

Cultural distance encompasses belief, value, and social systems that shape the behavior of individuals and businesses in a country. It may relate to religion, race, ethnicity, and language. Cultural attitudes toward big business and globalization may also hinder expansion plans.

Walmart’s global expansion has seen it gain a presence in 27 countries. But profitability is highest in three countries that share similar cultural values to the United States: Canada, Mexico, and the United Kingdom.

Administrative distance includes such things as historical and political ties. It also includes the presence or absence of free trade agreements and even the level of corruption present in foreign governments.

Returning to the Walmart example, a big part of its success in Canada and Mexico is the presence of the North American Free Trade Agreement between the three countries.

Geographic distance denotes the physical linear distance between the home market of the business and the country it has identified for expansion. In some cases, geographic distance may also refer to differences in climate and transportation network capacity.

Again, Walmart’s success in Canada and Mexico is at least partly explained by the United States sharing a land border with each.

The most obvious forms of economic distance between countries are consumer wealth and levels of disposable income. In other words, can foreign citizens afford to buy an expanding company’s products? Furthermore, a company that wishes to manufacture in another country must also assess labor costs, available infrastructure, and the presence of trade unions among other things.

Walmart has traditionally not been as profitable in emerging economies, but it has found a way to operate in these countries, nonetheless. For example, the company sources much of its stock from the low labor-cost market in China, thereby taking advantage of the large disparity in economic distance.

Advantages of the CAGE Distance Framework

The Value Net Model argues that co-operation and competition between organizations are not only desirable but also necessary when doing...