For the first time, in 10 years, Netflix has lost subscribers!

What happened there? Let’s try to make some clarity to this mess.

As Netflix announced its first-quarter results, the stock fell apart:

In a single session, the company lost 35%. And we’re not talking about a low-cap meme stock. That burned billions of dollars in a single stroke.

Not only this was unforeseen (clever investors like Bill Ackman had placed very large bets on Netflix) but it seems very hard to assess where the problem lies.

Indeed, it’s easy to point out all the issues Netflix has today.
But there is another fundamental problem: where’s the attention going?

Netflix explained how the COVID boost in revenues has ended, and numbers didn’t lie about that:

But what are the underlying problems Netflix has identified?

The executive team has identified a few core problems that caused this sudden loss in subscribers:

1. Uptake of connected TVs: as Netflix pointed out they do not control the hardware part, thus, the more streaming services are offered on smart TVs, and the more traditional TV services add their own on-demand services, the harder it gets for Netflix to keep the same level of attention.

In the past, I pointed out, how Netflix started to build its distribution on hardware, by placing its default button on the smart TV controller, before anyone else. Yet the remote controller is now, getting very busy!

2. 100m additional households are watching but not paying for Netflix.Over the years, Netflix has incentivized users to simply share their passwords. This is also what made Netflix cool in the first place.

Yet, when you reach saturation, you get, as a company, much less cool about users sharing their passwords.

Therefore, Netflix is working on new paid sharing features, where current members have the choice to pay for additional households, trying to monetize these users.

We can also foresee some crackdowns, where users will be prevented to access the platform if sharing the password on other devices (things might get ugly there!).

3. An ad-supported Netflix: in the last years, as we went through the pandemic, Netflix has been spiking up prices for its subscriptions, which worked pretty well in terms of revenue generation.

For one thing, it shows how much people love Netflix, as they kept the subscription, nonetheless these price spikes. Yet, this strategy doesn’t work well, especially when the macroeconomic scenario isn’t as good.

As Netflix CEO, Reed Hastings has highlighted, on arstechnica:

“Those who follow Netflix know I’ve been against the complexity of advertising and a big fan of the simplicity of subscription, but as much as I’m a fan of that, I’m a bigger fan of consumer choice, and allowing consumers who would like to have a lower price and are advertising-tolerant get what they want makes a lot of sense.”

And Hastings further highlighted, in relation to the ad-supported plan:

“I think it’s pretty clear that it’s working for Hulu. Disney’s doing it; HBO did it. I don’t think we have a lot of doubt that it works. You know that all those companies have figured it out. I’m sure we’ll just get in and figure it out as opposed to test it and maybe do it or not do it.”

How would this work?

Hastings explained: “it would be a plan layer like it is at Hulu so if you still want the ad-free option, you’ll be able to have that as a consumer. And if you’d rather pay a lower price and you’re ad-tolerant, we’re going to cater to you also.”  While the ad-supported service is tempting, is also worth highlighting that it might run at very tight margins for the company if the underlying content is primarily licensed content (just like for Spotify, the more you stream licensed content, the more content royalties costs go up).

Instead, such a model might work, if Netflix were to do it to offer its own content, but with the caveat of pacing that out.

In short, when a new series comes out, instead of enabling ad-supported subscribers to binge-watch it, content would be paced out. And if they want to watch it all, at once, they would need to pay for a full subscription plan.

3. New streaming services have also been launched. Competition in the streaming market has gotten very rough, and more platforms compete for the same type of attention:

Based on that, Netflix will further ramp up the investments in content, to produce new hits and originals.

4. Macro factors, including sluggish economic growth, increasing inflation, geopolitical events such as Russia’s invasion of Ukraine, and some continued disruption from COVID are likely having an impact as well.

Here there is not much control if not keep focusing on re-growing the subscribers base.

What do I think should Netflix do instead?

First, we need to reassess competition, and where it’s coming from.

Is the competition really between TV and streaming only?

Attention is not an asset, which is easy to control.

And while Netflix is assessing its competition, linearly, in reality, the threat might be coming from unexpected places.

The main mistake I believe Netflix is doing is on assuming that the main competitors are TV and streaming services. There is more to it!

Beyond streaming, attention is a fluid asset

As Anand from CB Insights has highlighted “Maybe TikTok is what is killing Netflix?”
I think this is a great point to start with: 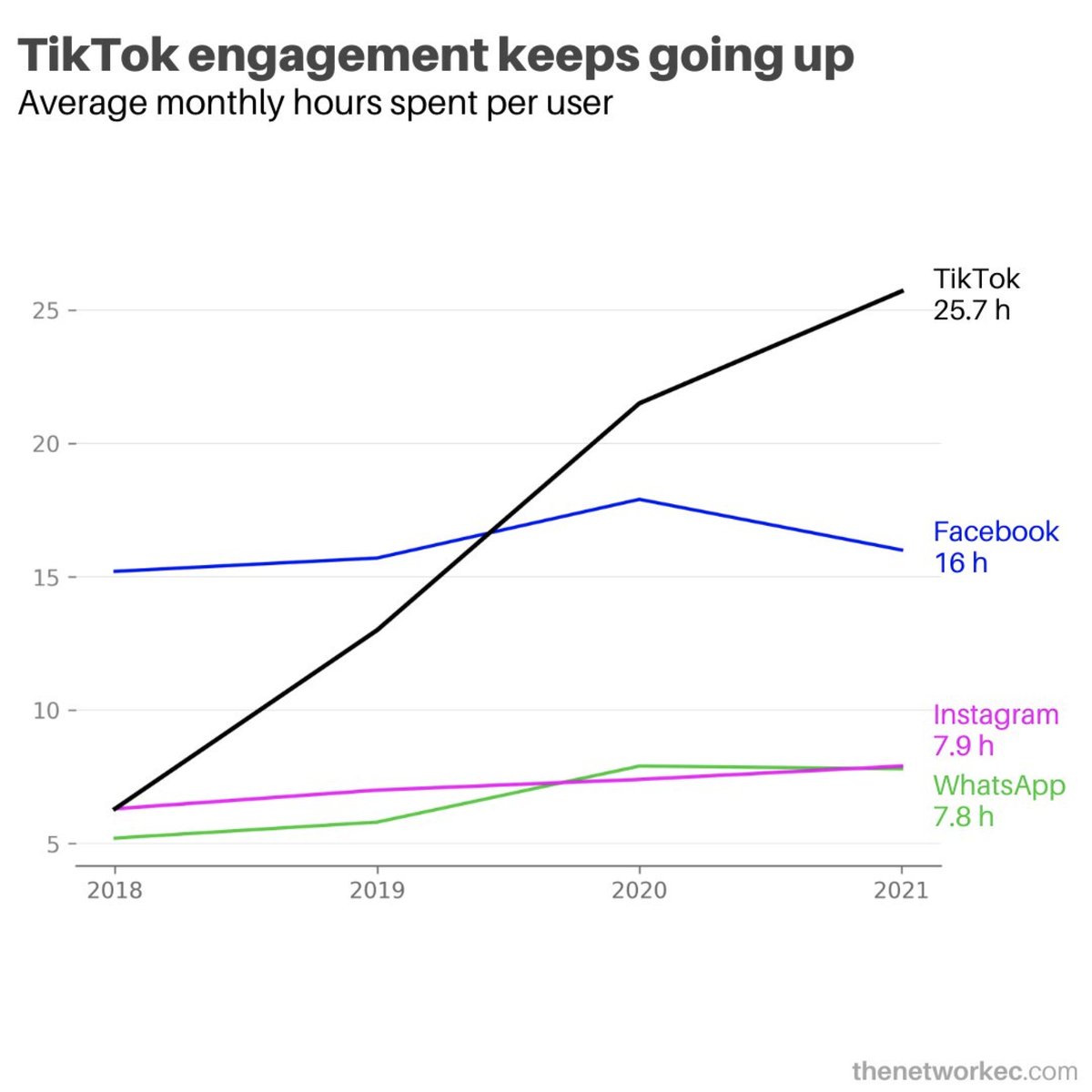 In fact, attention is a very fluid asset, which moves beyond traditional definition. And across platforms. In 2017, Netflix CEO, Reed Hastings highlighted:

“You get a show or a movie you’re really dying to watch, and you end up staying up late at night, so we actually compete with sleep, and we’re winning!”

Yet, today most of the attention is moving to other platforms. And the interesting part, is that, while platforms like TikTok offer natively short-form content. Many people end up spending hours on the platform.

So below are some of the things, I believe Netflix should do:

1. Vertical integration: Netflix managed to build an incredible brand over the years. It’s still an app, either on a Smart TV or on a mobile marketplace. The main company’s asset is its content. Not even the licensed content (that can be taken away from it, anytime), but its own content (the Netflix original series and movies). Thus, in order to build a long-term advantage, Netflix should also focus on bringing to market a successful device for consuming content.

As the story goes, back in 2007, Netflix was looking into building its own hardware. Indeed, its set-top box (it would enable to stream movies from the Netflix catalog) was ready for launch! Yet, at the very last minute, CEO, Reed Hastings canceled the project.

As reported by The Verge,  Hastings’ fear was that “if the company released its own hardware, it would be seen as a competitor to the very companies with which it hoped to partner.”

Hastings has been quoted as saying: “I want to be able to call Steve Jobs and talk to him about putting Netflix on Apple TV, but if I’m making my own hardware, Steve’s not going to take my call.”

This shaped the company for years. Yet, what if Netflix got into the hardware game again? Instead of a Smart TV, Netflix could build a VR device to watch its series in high definition. Or perhaps a projector, smart theater device, to project Netflix anywhere in the house!

The company could sell it at cost while offering its subscription services within the device. In this way, if successful, over time, it can control the overall customer experience.

2. Reassess the content development strategy.
In the last years Netflix has produced great series, and important hits, yet, it shifted on quantity vs. quality.  The content development efforts instead should be more skewed toward coming up with new content formats, innovating those formats, and raising the bar again (just like Netflix did in 2013 with House of Cards).

3. A hybrid between binge-watching and scheduled releases. Binge-watching has been a disruptive content format, which has helped define Netlfix as a brand. Yet, one thing was to enable binge-watching, back in 2013, and toward the pandemic. Another is to ask, whether binge-watching is still a competitive format today.

In fact, binge-watching worked as an incredible flywheel in the early years. The rhythm it demands might not be sustainable over time, from a business standpoint.

While in the past, as a Netflix subscriber, once you had binge-watched your way through a series, you could still wait for the next series. Now, you have way more choices and options. And the need to jump on another series might drive you out of the platform.

Paradoxically then, in this scenario, it might make sense to start testing out some hybrid forms of content consumption. For instance, why not give the ability to binge-watch only for higher-tier plans? In short, binge-watching has been a defining feature of Netflix, in the early days. Might become a feature to discern between basic to more advanced plans.

Netflix has been testing, for a few months, new short-form content formats, such as  Kids Clips and Fast Laughs. Fast Laughs, in particular, is a TikTok-like platform where clips of popular shows on Netflix are hosted, and shown with a continuous scroll, and at full screen. In short, it tries to replicate TikTok’s successful formats.

Of course, this can be a powerful strategy to attract young users from platforms like TikTok, and Netflix has the data to understand what content on Netlfix makes sense to translate into short-form clips.

Yet to make those sorts of platforms successful, Netlfix should plug in user-generated content. In short, it should enable mechanisms on its platform that enable users to cut the clips they find most interesting and interact with the content.

This new, user-generated content, can become new formats, that can also serve as a way for the company to create new types of content, that are able to attract future generations.

Gennaro is the creator of FourWeekMBA, which reached about four million business people, comprising C-level executives, investors, analysts, product managers, and aspiring digital entrepreneurs in 2022 alone | He is also Director of Sales for a high-tech scaleup in the AI Industry | In 2012, Gennaro earned an International MBA with emphasis on Corporate Finance and Business Strategy.
Business Engineering