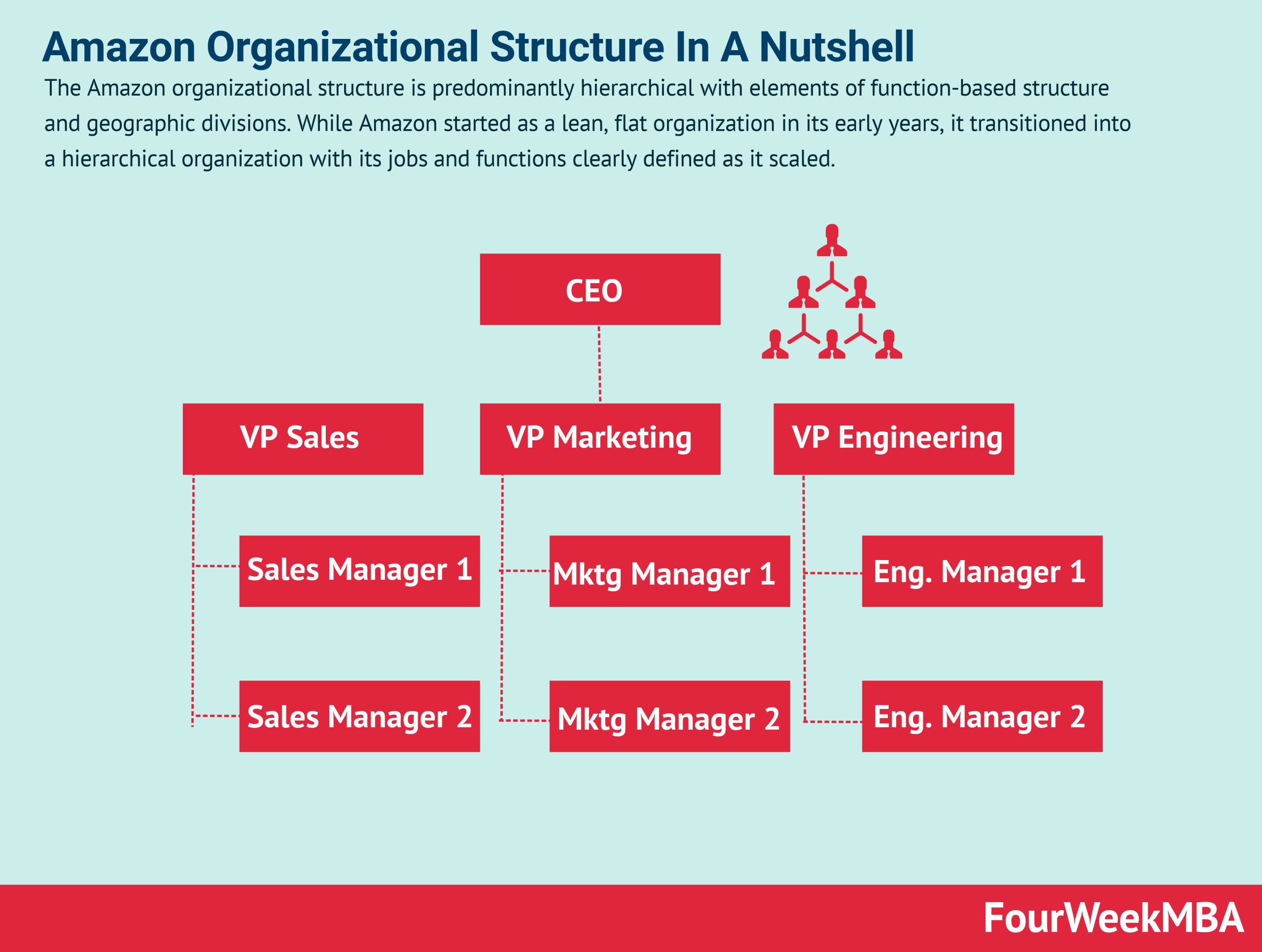 The Amazon organizational structure is predominantly hierarchical with elements of function-based structure and geographic divisions. While Amazon started as a lean, flat organization in its early years, it transitioned into a hierarchical organization with its jobs and functions clearly defined as it scaled.

Amazon is the largest eCommerce company in the world, employing over a million people spread across many different countries.

At the top of this chain is a senior management team reporting directly to CEO Jeff Bezos. Dubbed the S Team, this small team of Amazon senior executives works with Bezos to disseminate his ideas, solve problems, set high-level goals, and shape company culture.

The S Team has senior executives in charge of several function-based groups, including:

Despite the vast geographical reach of Amazon, the company only has two geographic divisions: North America and International.

The company also utilizes groups according to physical location and related business goals. For instance, Amazon.com Inc. is the eCommerce arm of the company. It uses groups to manage eCommerce operations according to geographic regions and their associated regulatory frameworks and logistical challenges. Ultimately, this allows Amazon to address country or region-specific issues proactively and efficiently.

How has Amazon used organizational structure to its advantage?

Many would assume that a large, hierarchical organization would be rigid and resistant to change.

However, this is not the case at Amazon. The company is a flexible and adaptive market leader in eCommerce. Indeed, Amazon has caused disruptive innovation in online marketplaces and also in global logistics.

How is this status maintained in the face of centralized decision-making and top-down control?

The goal here is efficiency and scalability. Smaller teams spend less time managing timetables or keeping others in the loop and more time doing what needs to be done. In turn, each team has access to company resources to meet short and long-term goals. A product team, for example, can add new product lines without having to meet with the project, process, or logistics teams.

In purely theoretical terms, these teams are given more autonomy than say a worker in an Amazon warehouse. But they are very much marching to the beat of Bezos’ drum.

Stability is also a notable feature of the Amazon organizational structure – particularly in senior management.

Although there are frequent new additions to the S Team, many members have been in the same position for years or in some cases, decades. The long-term success of the hierarchical model has resulted in a highly experienced senior management team.

Ultimately, this has allowed Amazon to grow and expand into new markets without sacrificing competitiveness.

Flat Organizational Structure In A Nutshell

In a flat organizational structure, there is little to no middle management between employees and executives. Therefore it reduces the...